"One of my favorites of 2021." Laurie Reads Romance

Gabe says he'll pretend to be my boyfriend for the holidays. The perfect guy to get my parents off my back about my perpetually single state.

But what I really need is someone who'll make my family beg me to never bring anyone home again.

Gabe promised he was up to the task, but he turns out to be a little too good at being bad. We have so much fun with our game, in fact, that I start to forget it's all for show.

By the time Christmas Eve rolls around, Gabe's the only thing I want to unwrap. But if I do, I'm afraid he'll turn out to be a gift I don't want to return.

My Fake Bad Boyfriend is a hot standalone holiday novella that's sweet as a candy cane, funny as Elf, and spicy as fireball whiskey in your hot chocolate. Treat yourself to a laugh-out-loud romance this Christmas!

"I truly enjoyed every page of this book." Reading in the Red Room 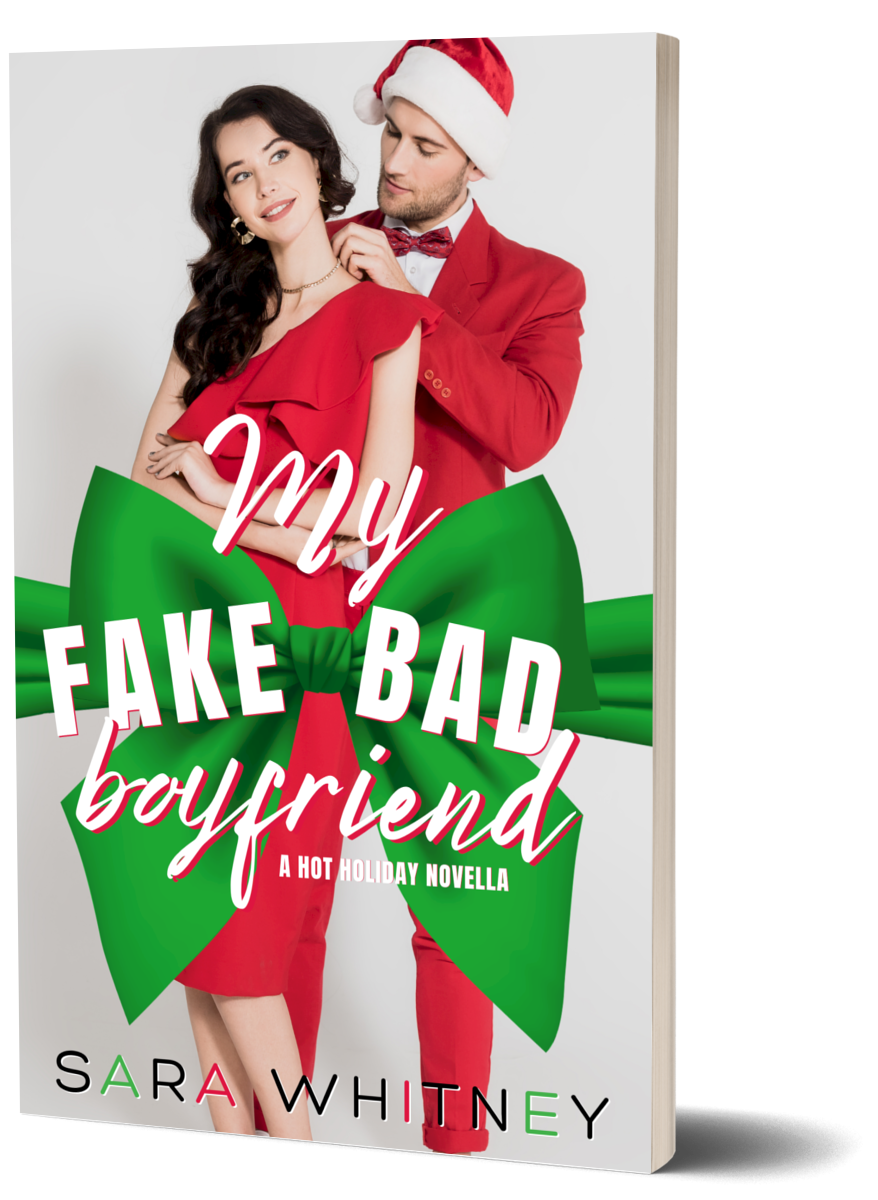 Get your copy now!

I'm overdressed. Or maybe I'm underdressed. What should a person wear to meet her fake boyfriend?

If it’s brown wool tights, I’m all set for this stupid, embarrassing meet-up.

Every time the heavy door to the Beaucoeur Public Library creaks open, I whip my head in that direction. My work day ended twenty minutes ago, so I’m hovering at the edge of children’s fiction, trying to act nonchalant. The bright December sun sears my eyes as the door swings shut, but each time it's not the person I'm waiting for. Not that I know what the person I'm waiting for looks like, but I'm pretty sure he's not a stressed-out mom of three or an eighty-year-old man with a walker.

Oh God, what if he's the eighty-year-old man with a walker?

I'm losing my nerve. Why did I let Faith talk me into this? It started off as a joke, but somehow it ballooned into this.

I grab my phone to text her that I’m calling it off when the door opens one more time and a tall figure blots out the sun. I’m still a little dazzled as the door swings shut and the man’s eyes sweep across the main library room. I'm guessing he's doing the same calculus I've done, dismissing the frazzled mother, the old guy unloading his returns onto the wooden counter, and my bald boss Ron, bent over the computer at the main desk.

Then his eyes land on me, and his expression shifts from focused to friendly as he heads in my direction.

My palms are sweating. I scrub them along the sides of my corduroy skirt, aware that I'm going to have to shake his hand. Wait, do people still shake hands? Isn't that considered a hygienic no-no now? What do you say to the person who's going to be sharing a bathroom with you at the end of the month if everything goes right?

Guh. His voice is deep, and although he’s smiling at me as he tucks his knit hat into the pocket of his Carhartt jacket, he doesn't extend his hand to shake. Looks like he feels the same way I do about unnecessary germs. Oh hell, maybe he doesn't like touching at all.

Wait, that's probably for the best given the circumstances.

He’s looking at me expectantly, his hands tucked into the back pockets of his jeans, and I still haven't said anything. Double hell. I offer my best smile, which probably looks frighteningly perky, and tuck my hair behind my ear.

Gabe Dickenson. Faith hadn’t told me what he looked like, just that I wouldn’t be disappointed.

She was correct. This handsome man who smells like cold air and pine trees is waiting for me to take the lead on this meeting while I’m standing here staring at his shoulders. His beautiful broad shoulders.

“Thanks for meeting me here,” I finally say, my voice sounding abnormally stiff.

He glances over his shoulder at the checkout desk, then looks back at me. “Are they going to shush us?” His voice drops to a whisper. “Are we even allowed to talk?”

This gives me pause. “Have you never been to a library? You're allowed to talk.”

A frown, there and gone, passes over his face. Great, I've already managed to offend him. “Not that I think it's bad if you haven’t—”

“Faith said you have a proposition for me.” He’s still smiling, but it’s less relaxed now.

Okay then. Now I'm the one looking over my shoulder at the checkout desk. The old guy is sorting through his return pile as Ron patiently waits, his watchful gaze sweeping the main library floor.

“Follow me.” I jerk my head to the right and Gabe shrugs and lets me lead him past Sendak and Seuss and Silverstein until we reach the end of the children’s section and turn right, heading deep into adult periodicals. So much of it’s online now that this section doesn’t see much traffic, which means we should be able to talk without bothering anybody or being overheard. I'd rather die than have that last thing happen.

We both take a seat in the periodicals reading nook, and he shrugs out of his coat and leans back in his chair, propping his ankle on his knee and slinging his arm over the chair back. His jeans look comfortably worn and his boots are scraped and dirty, clearly for work and not for show. When the sleeve of his gray Henley pushes slightly up his wrist, I see the edges of a tattoo peeking under the cuff.

I swallow again. This was a bad idea.

I don't usually say exactly what I'm thinking, but expediency seems important at this point.

“You say that like you’ve never hired a boyfriend before.” Every time he smiles, the corners of his eyes crinkle. It’s a distraction. So is his messy dark hair and his tall, lean body. He's not at all who I'd pick as my boyfriend. He's not even somebody I'd stand next to at a bar while I was trying to catch the server’s eye. He’s too… scruffily attractive. Too confident. Too unaccustomed to libraries and the whole librarian lifestyle. Well, my librarian lifestyle anyway. Plenty of my cohorts are the cool types who never stay in on a Saturday night.

I lace my fingers together in my lap, feeling strung as tight as a drum in the face of his loose-limbed sprawl. “I haven’t. Obviously. Have you, um…”

“Been an escort before?”

Alarm bells jangle through me. “An escort?” My voice is a little screechy, and he throws his head back with a burst of laughter that Ron definitely heard up at the front. Oh God.

He must see me starting to panic because he leans forward and rests an elbow on his knee. I get a glimpse of even more of his tattoo now, and it looks like it covers a chunk of his forearm.

“Bad choice of words,” he says. “Look, Faith said you need a guy to take home for Christmas to get your parents off your back, and I can be that guy. I can eat overcooked turkey and play nice with your tipsy aunt. But I'm not an escort.” He crosses his arms over his chest, his lips quirked in amusement. “That means I'm not going to sleep with you, no matter how much you beg.”

“I wasn't asking you to…” My voice drops to a whisper even though we’re still alone. “We won’t even be sharing a bedroom. This isn't about sex.”

“Good, because I’d have to report you to the authorities for propositioning me. Solicitation’s illegal, you know.”

He’s dead serious now, and I press my hands to my flaming cheeks as I shoot to my feet. “You should go. This was a —”

I drop like a puppet whose strings have been cut, trying to get a read on this guy who’s got me so off-balance so quickly. We’ve been talking for what, five minutes? And he’s already shortened my name and jokingly threatened to have me prosecuted. It’s way too much for me.

Maybe he senses that he’s pushed me too far because when he speaks again, it’s in a soothing, calm the startled deer who’s about to bolt tone.

“I don't know how much Faith told you, but I don't have family in the area”—another quicksilver frown—“so it’s not like I have anywhere to go for Christmas. She thought I might be able to help you out. That’s it.”

“And you’ve never done the pretend boyfriend thing before?”

He slumps in his chair and laces his fingers behind his head. “Do I look like a Hallmark movie dude?”

Actually, yes. He looks like the small-town boyfriend who owns a Christmas tree farm and is waiting to steal me away from the big-town lawyer fiancé who takes me for granted. Then again if I had a neglectful lawyer fiancé, we wouldn’t be here. My mom would swoon over a lawyer, even if he was a big-city asshole.

Gabe fidgets in his seat, his fingers tapping the arm of his chair.

“Okay, so let's talk about what you need from me.” His hands are big, like the rest of him, and I bet that Christmas tree farmer’s boots look a lot like his do. “I’m happy to—”

I blurt it out, surprising both of us. He leans back and waits for me to speak, and I say the wild, stupid thing that just popped into my head.