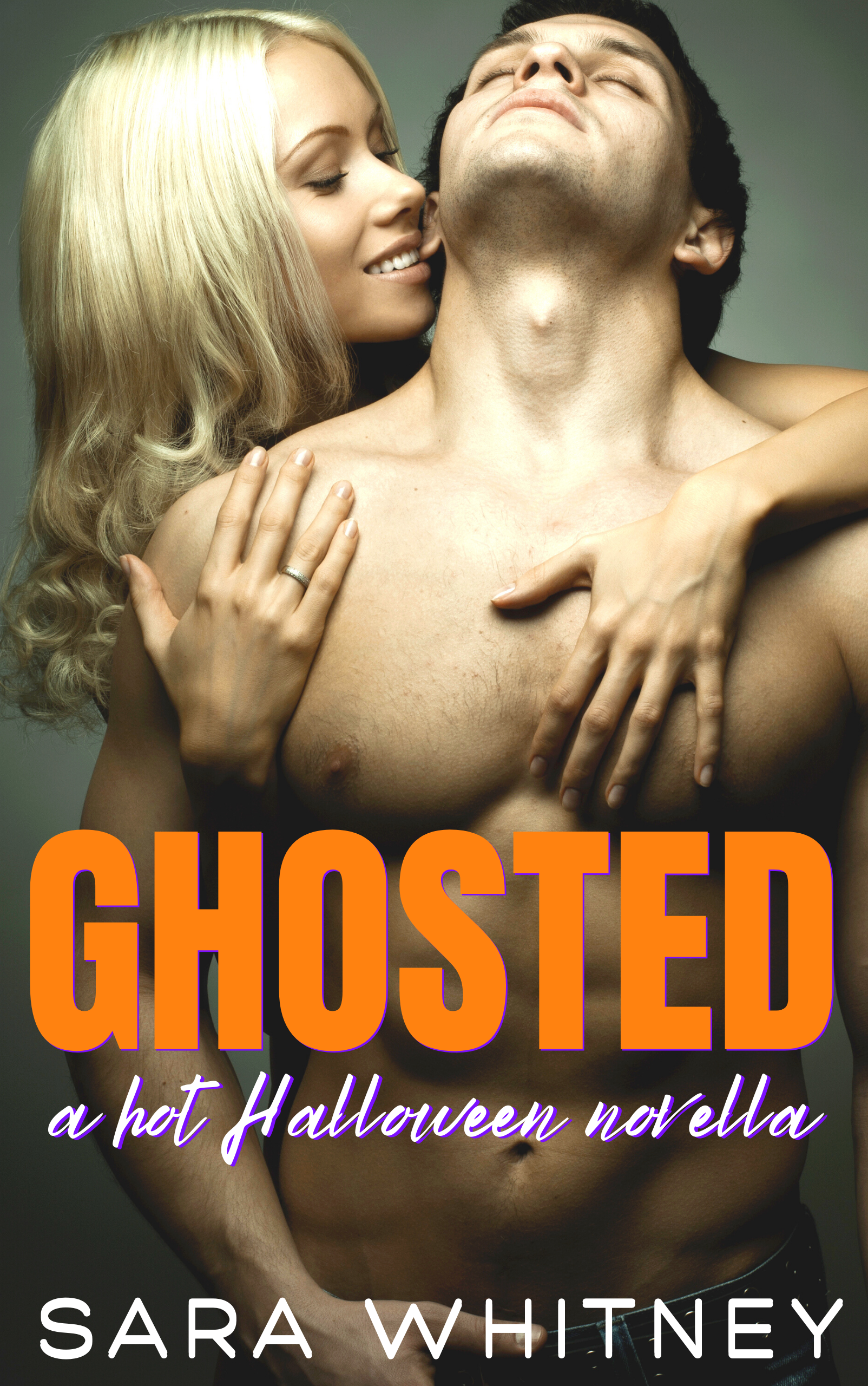 This quick, steamy read will melt on your tongue like the finest chocolate toffees.
Tessa thinks Daniel ghosted her.

Now the two attorneys are fighting over the last bag of Halloween candy and squaring off in court.

How long can they ignore the reasons for their falling out—or the passion still simmering underneath it?
Ghosted was originally published as Tempting Treat in the 2019 Trick or Treat Me anthology.
Amazon   Kobo
B&N   Google
Apple  Others

It was the most wonderful day of the year, and Tessa Braddock had exactly thirteen minutes to take advantage of it.

She whipped her Nissan into the nearest parking spot on this, the glorious first day of November, and hustled into the store in search of her Holy Grail: the half-off Halloween candy. She’d precisely timed this stop to allow her to make the purchase, book it to her building’s parking garage, and be seated at her desk with thirty seconds to spare before her day of billable hours at the law offices of Stanley, Barnes, and Silverstein officially began.

She headed straight for the seasonal aisle and stopped short at the display of carnage.

“Seriously?” The sun was barely over the horizon, and already the candy shelves looked like they’d been stripped by locusts. Beaucoeur, Illinois, was clearly overrun with degenerate sugar addicts—and okay, fine, she was one of them, but she’d never paw through the stash with such destructive vigor. After a nervous glance at the time on her phone screen, she started sifting through the jumble, finding only bags of hard candies and eyeball-shaped gum on the shelves at eye level.

Time to get serious. She unbuttoned her suit jacket and bent awkwardly to dig through the remaining bags all the way in the back of the middle shelf, determined to find her heart’s desire. But she didn’t spot a single acid-green label anywhere. Dammit, was she really too late? Dr. Spooky’s Toffee Treats were only available during Halloween, and she was starting to think she’d seriously screwed up by not taking the time to pick any up before now.

All she needed was one bag. Just one measly bag of her favorite chocolate-toffee candy would ease the sting of the eleven-month drought she was facing until it reappeared in stores the following Halloween.

“Aha!” Her heart leaped when she spotted one lone package wedged in the back of the shelf with the familiar swirly script of the Dr. Spooky logo. She stretched forward to grab it, but just as her fingers closed around the bag to pull it toward her, another hand grabbed the opposite side and gave a competing tug. What in the what? Her eyes traveled across the plastic surface of the bag, landed on a set of long, strong fingers gripping the other end, and kept moving upward.

“Oh, sorry. Do you mind?” The rich voice was accompanied by an endearingly charming smile that immediately set alarm bells jangling in Tessa’s head.

“I do mind actually.” She tightened her hand on the bag and thanked the gods of clearance candy that her cool tone didn’t betray any of her quavering nerves.

“Well, well, well. Tessa Braddock.” The smile vanished from the would-be candy thief’s face. “Didn’t realize that was you wedged in the shelf.”

Dammit. She hadn’t seen Daniel Walden since she quit her job at the Cavelier County State’s Attorney’s Office six months ago, so naturally they were bumping into each other for the first time when she was in danger of flashing her underwear to the whole store.

“I’m not…” She shot upright, refusing to let go of her corner of the bag. “… not wedged in the shelf. And this is my bag. Get your own.”

“Love to, but it looks like it’s the only one left in the store.” Daniel’s amber eyes drifted across her face before he frowned and turned to the shelves. “My God, this town’s full of sugar fiends. It’s not even 9:00 a.m.”

Tessa’s grip didn’t waver. “That’s too bad for you. This one’s mine.”

He turned back to her, his frown deepening. “Wait, are we about to throw down over a bag of candy?”

The disbelief in his voice made Tessa’s competitive drive kick in, and she tugged hard. “No. We’re about to throw down over a bag of Dr. Spooky’s.”

“Oh, that’s right. You always did keep a bowl of these on your desk every Halloween, didn’t you?” Still glowering. Still gripping the damn bag. “I bet you have room for a dozen bowls in your fancy new office.”

You’d know for yourself if you’d ever bothered to call. But that thought only brought pain, so she pushed it aside and snapped, “Knock it off. We’re both going to be late for work.”

Not that it mattered to Daniel. He could stroll into court twenty minutes late in nothing but a towel, and everyone would fawn over how beautifully he’d accessorized the terry cloth to complement the judge’s robes. She forced herself to look him directly in the eye, even if she did have to tilt her head several degrees. Good Lord. Had he always been so tall? He’d definitely never been this grumpy before or made her this nervous.

Time to end this uncomfortable interlude.

“You know very well how much I love these things, and they’re only available at Halloween. So just be a decent human and let. Me. Have. It.” She punctuated each word with a jerk of the bag, determination hardening her jaw.

This bag of magical chocolate toffee suddenly represented every anxious night and frustrating compromise she’d been forced to make over the past few months, to say nothing of the ache of Daniel cutting her out of his life. After all that, she’d be damned if she’d let him walk out of this store with her bounty. Then again, he was stronger than she was, and his clenched hand showed no signs of wavering.

He raised his eyebrows. “You? Moved in with a roommate?”

Her flush increased. Was it so hard to imagine someone wanting to live with her? Then again, it served her right for spinning falsehoods on the fly rather than kicking him in the shins and running off with her prize. This encounter was wrecking her carefully timed schedule.

“A roommate who can only be cured with Dr. Spooky’s Toffee Treats?” Daniel’s mouth curled in smug amusement, driving her even further over the edge. She’d clocked the movements of those lips for the two years they’d worked together without ever finding a position that wasn’t wildly attractive, and she sure as hell didn’t need that kind of distraction during this tense negotiation.

“Yes. They’re made by a doctor, after all.” Tessa tugged again, and Daniel tugged right back. Seriously, he was going to crush her candy if he wasn’t careful.

“Shame about your roommate.” He rocked back on his heels with a speculative look on his stupid handsome face. “But see, I was picking up this bag for my aunt.”

“Your aunt.” She pushed all the skepticism in her body into those two words.

Daniel shook his head mournfully. “Her pet bird just died. She’s inconsolable, and I wanted to bring her the only thing that’ll cheer her up.”

“Only chocolate-covered toffee available exclusively at Halloween will help her get over her bird heartbreak?”

“Sylvester was a cockatoo. Beautiful bird.” He bit his lip and looked heavenward, the showboat. “Just a beautiful bird. Only her favorite chocolate will help in her time of grief, so I’m dropping these off at her place after work.”

God, he was good. No wonder juries loved him. Although, wait a sec… “I thought your family all lived in Minneapolis?”

“Okay, but my roommate’s an only child. An orphan.” Her mind raced, spitting pure garbage now. “The rest of the family died in a tragic… a tragic, uh…”

“And your roommate needs Dr. Spooky’s to recover from lightning sickness?” Daniel’s lips trembled with suppressed laughter, giving her a glimpse at the playful guy she used to know, and oh, how she wished things were different between them. But for now she needed to end this conversation and get back to her real life.

“Yes!” she ground out. “Weird novelty Halloween chocolate is the only thing that helps my orphan roommate get over his lightning sickness, so just… let… go.” The last words emerged through gritted teeth, and Daniel let go of the bag so quickly that she staggered back a step. When she looked up in surprise, she found all traces of emotion wiped from his face. No anger. No amusement. Just nothing.

“I wouldn’t want to get in the way of your nursing him back to health.” He jammed his hands into the pockets of his charcoal suit pants. “See ya round, Braddock.” And with that, he turned and strolled out of the store.

Once he was gone, Tessa hustled through the checkout with her hard-won chocolate. Back in her car, she unwrapped a piece of victory toffee and popped it into her mouth. But the memory of Daniel’s flat expression as he said goodbye turned the sweetness on her tongue to sawdust.