Happily Ever Afters for Hope: A Charity Collection for UNICEF

Happily Ever Afters For Hope is an anthology with over a dozen stories from some of your favorite authors. Each story features a couple—many fan favorites!—living out their hard-earned happily ever afters, and 100% of the royalties from this collection will be donated to UNICEF to support their efforts in Ukraine. This anthology will only be available for a limited time, so make sure you one-click your copy before it’s too late!

Sara's story follows Trip and Ashley Murdoch from Tempting Lies. Their marriage has been floundering, but Trip's determined to win back his wife with an epic date night. Unfortunately, every single one of his best-laid plans goes awry. (Don't worry; the anthology has "happily ever after" right in the title, so things work out in the end.)

Don’t miss out on this feel-good collection in support of a good cause for only $.99! 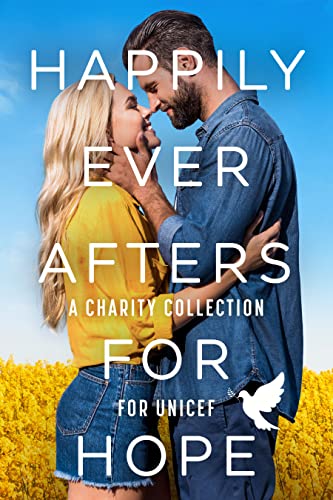 Preorder your copy now for $.99! Available in ebook for a limited time.

Ashley Murdoch was going to have sex with her husband tonight.

She was. She was going to do it.

With a little nod at her reflection in the bathroom mirror, she finished patting her face dry and replaced the towel on the rack, tugging the corners until they were precisely lined up. Once she was done, she turned out of habit to fix whatever mess Trip had left with his towel on the rack by the shower and was surprised to see it hanging neatly, the angles as square and flat as the ones she’d fussed her own into.

Come to think of it, she hadn’t had to collect one of his towels from the floor a while. Ditto his socks and work shirts.

Was remembering that the hamper existed Trip’s attempt at breaking their sex drought? Her first instinct was to tease him about it—apparently he thought cleanliness was actually next to Pound Town—but she immediately stuffed the thought down. It had been months since they’d been in a joking place with each other.

Right. That’s why she probably wasn’t going to have sex with her husband tonight.

Schooling her face into a neutral expression, she switched off the light and pushed the bathroom door open to face yet another awkward round of goodnight talk.

Trip was already in bed and leaning against the headboard with the comforter draped across his lap, and he was wearing a shirt.

She swallowed hard. Before, he’d always slept in nothing but a pair of well-worn athletic shorts, but when things got weird between them, he’d started covering up that chest that she loved. She’d never fully understood why. Was he punishing her? Had his four-month mantrum made him more susceptible to chills?

Whatever the reason, she kept her disappointment off her face as she crossed the room to her side of the bed.

“You smell nice.” His voice rumbled as she slid in next to him.

“Thanks.” She brushed a hand over her bare knee, which was extra soft and sweet smelling at the moment. “It’s the new lotion my mom got me for my birthday.” Does it make you want to rip my panties off with your teeth?

“Mmm.” His eyes flicked to the exposed length of her thigh, then her neck above the scooped neckline of her sleep shirt, then her buffed and moisturized lips. Her pulse rocketed upward at his attention, but just as quickly, he settled his gaze back on his phone screen.

Ash wanted to scream. They were cautious around each other now. After nine years of marriage, years mostly marked by jokes and laughter and an inability to keep their hands off one another, they were now tiptoeing around like their fragile peace would shatter if one of them said the wrong thing. All because she’d said the wrong thing.

“Are we still on for tomorrow?” He was looking at her again, and he sounded almost nervous. A crinkle appeared between his dark brows, and a question lurked in his hazel eyes.

“Of course,” she said stiffly. She hated that nothing about their interactions were easy anymore. “But don’t feel like you have to do anything particularly special or—“

“Ash, I’ve got it.” He reached across the endless expanse of their bed and rested his fingertips on the back of her hand. “Seriously. I’m excited.”

She wanted to believe him. But her words on the drive home from Thanksgiving dinner still echoed in her head: I wish you were more like your brother. Even now, she winced thinking about it.

All she’d meant was that she wished Trip wanted to do things, like Aiden did. Like they used to do before they’d gotten older and their jobs had gotten demanding and dozing in front of the TV after dinner was more appealing than hiking or trying a new restaurant or driving into Chicago for a concert every once in a while.

But Trip had taken it all wrong, and her off-handed comment had kick-started some kind of short-lived quarter-life crisis that had soured her husband’s cheerful bluster and left him snapping at his brother and growling about work and generally acting like a miserable bastard.

Of course, the true root of his mini-meltdown had been the anxiety he’d been internalizing about his father’s losing battle with dementia, and now that Rudy was getting specialized care at a UChicago Medicine clinic and Trip and Aiden had figured out how to co-run the family construction business, things were a billion times better—at work, anyway. After four months of Trip being an ass and several weeks of his abject apologies for being said ass, she’d forgiven him, sure. But she’d gotten so used to guarding her interactions with him while he’d been stomping around like a man-child that she’d just… stayed guarded, even after he’d apologized a million times and stepped up his efforts to be the husband she remembered from before.

And now here he was, looking at her with vulnerability in his eyes, and she was the one who didn’t quite know how to respond.

“If you say so,” she finally said, still not convinced that he was actually looking forward to a big date night. “If you need help with plans, I can—”

Another feather-light touch landed on her wrist, this time accompanied by a flash of a grin. “I’ve got it, babe. Trust me.”

Just as quickly, he removed his fingers and turned back to his phone, leaving her with nothing but a faint tingle on her skin.

This was all so stupid. She wanted to reach for him, nestle her head into his shoulder, wrap her arms around those strong shoulders and press her breasts into his chest. Ask him to kiss her neck and bite her earlobe and give it to her, for God’s sake. But she didn’t. She’d tried to be the light during those dark winter months when he’d gone out of his way to seek out the darkness. Now it was May, but the fresh green leaves appearing in their front yard hadn’t thawed their reserve. At this point she’d been keeping their distance for so long that she wasn’t even sure how to make the first move anymore.

So she didn’t throw herself onto his lap and tell him how silly they were being. She didn’t strip off her shirt and beg to lose herself in his body the way she dreamed of—literally, she dreamed about, sleeping next to him at night. She’d go to sleep tonight aching for the husband who was sitting right next to her.

With a sigh, she flipped off her bedside lamp and settled onto her side with her back to him, feeling empty from head to toe.

“Goodnight,” she said softly, squeezing her eyes shut and ignoring the press of tears.

After a moment, she heard the click of his own lamp and the rustle of the sheets as he settled in next to her.

“Goodnight,” he said from miles away.